My bad experience with a great book

They say you get more of what you focus on.

This summer I was reading the book Daring Greatly by Brene Brown. It's a really good book but I had to stow it away 3/4's read. The book and I, we're on a breather and I'm not sure when I'll be “brave enough” to pick it up again. 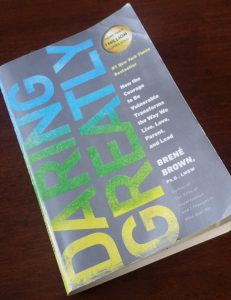 Brene isn't just an author, she's a researcher and more specifically she researches and talks about tough topics like vulnerability and shame. In this book, I felt like she inadvertently ripped off the scab for me on both topics and then scratched the wound until I put the book down. I was focusing on shame and vulnerability and that's what hit me left right and center.

I'm not sure if I actually was doing more “shameful” things (like booting my horse and yelling at my kids) or if I just noticed because I had just learned how to name that feeling after reading it in the book.

I was also feeling and allowing myself to be more vulnerable this summer. I was trying to feel things instead of putting them in a box and putting the lid on. This had me in tears many times. Sometimes I would share with a friend what was going on, sometimes I would just let the tears flow on my own. Being more vulnerable also meant allowing myself to be seen and sharing more.

Complicating the mix of emotions is the fact that I'm a recovering perfectionist. Perfectionists don't like shame or vulnerability. Add my own paranoia (thanks ego) about putting myself out there in business and having huge expectations of myself to have my shit together. Enter shame. Being a guide to many in mental toughness I “should” have my ducks in a row and be able to gracefully “own” all these feels and move on.

I can't count the number of times I've wanted to write a “here's all the ways I don't have my shit together post” just to take the pressure off. I joke about it, but at the same time I have to be careful I'm not using that as an excuse to dim my own light. The reality is, none of us have our shit together. According to Google, I'm actually a real mess. There, now you know.

This summer I met a very lovely lady that was witness to one of my shameful moments at the trailer. I apologized to her for my “gong show” and she smiled and simply said, “no worries, we all have bad days”. What a gem she was, and so true. We are all human. Even me, who tries very hard to be all zen and grounded. I'm often not and the more I try and resist the fact I'm not perfect, the more I will be shown how imperfect I really am. Thanks, shame.

As a competitor in any event whether it be horses or not, we're subject to vulnerability and we're potentially subject to shame. You put yourself out there in the arena to be judged or timed. And if it doesn't go well, we may feel shame. The way I see it, the ego is attached to shame. The ego will be quick to have you feel shame, especially if you attach your self worth to your performance in the arena.

I see people attaching their self worth to their performance in the arena a lot and this is a real quick way to feel shame at an intense level. You've handed over your self-worth to the judge of the day and the timer. Personally, I was attaching my own self-worth to how others chose to perceive me.

Once you gain an awareness of the ego and shame and recognize that it is not attached to who you are as a person, you will see that your performance in the arena is not a reflection of your heart and who you really are. You have already dared greatly (been vulnerable), entered the event while trying your best. That is enough.

We live in a culture that subconsciously encourages people to connect their self-worth to what they produce (whether it be something art or a win in the arena). We worship celebrities and sports stars like they better than us, which in turn positions us as small and “worth less” than them.

Subconsciously we pick up that if we “win stuff” we will also be considered “great”. Logically, we all know that if you're a twatwaffle and you win stuff, you're still a twatwaffle after. Right? Yes, I said that. No shame.

Likewise, if you're a real gem and you go run up the wall with your horse, you're still a real gem. I know that, but shame and the ego will try and tell you, you're not a real gem anymore. This will impact your desire to allow yourself to feel vulnerable again (should I enter or not?).

Here's the thing with my experience with this book on shame and vulnerability. As much as it was a thorn in my side, it rounded up some things I needed to work on and heal in a real hurry. It brought many things forward for me that I had been letting slide and it made me deal with them.

I was in a rough patch this summer if I'm being really vulnerable and honest here and there was a lot of time that did not feel good at all. Anxiety and depression would creep in on me, some of which I think was due to my thyroid medication but compounded by the need to heal some other issues. I did some healing around the things that were coming up from this book and I'm better off because of it.

Having scanned this book again while writing this post, I think I may be up for tackling some more growth. I'm up for another round. We bring about what we think about so I may work on being more disconnected from this book on the next round or I might go all in and blow the dust off the skeletons and go deep! Time will tell and this time I'll be more prepared.

I hope that I have piqued your interest in the book rather than scare you off. It is a doozy and worth your time. You may feel uncomfortable, but you will grow because of it. I did both.