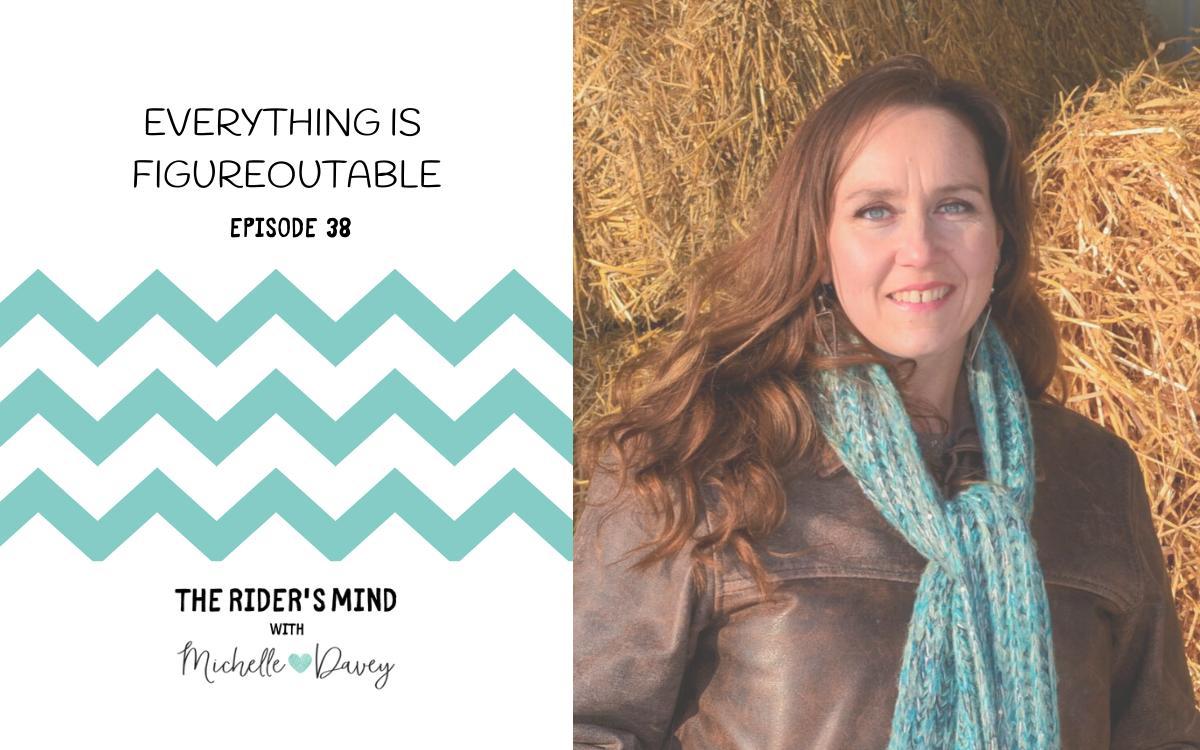 The Rider’s Mind Podcast Episode 38: Everything is Figureoutable

When you believe things so strongly and someone else doesn’t hold those same beliefs, you might find that it rubs you the wrong way. One of the beliefs I hold is everything is figureoutable.  I believe this right to my core, which makes it hard for me to understand and relate to people who don't believe this. In this episode, I’ll share why everything is figureoutable is such an important belief to hold, both when working with horses and for life in general.

If there is one mantra I hold near and dear to my heart, it is everything is figureoutable.  Marie Forleo coined that term and released an excellent book on it last year.  It’s all about the inner knowing that you can figure something out.

Growing up, I had a similar belief.  My Mom always said “where there is a will, there is a way”.  If you combine that with everything is figureoutable, you’re dynamite!  If you believe these two things, you can get anything done.

When you hold these beliefs, you can solve problems.

I’m all about getting to the root cause when I’m figuring things out.  For example, if your horse is bracing on the way to the first barrel, you want to figure that out.  Some people might put on a bigger bit, but you will figure out why it’s happening in the first place by looking at physical issues and training fundamentals.

You have to have the will, to find the way.

Sometimes I wonder if people just like to hear themselves complain.  I doubt they actually enjoy it. It’s likely just a habit or a pattern of negative speaking.  They probably don’t even know they’re doing it. But when you’re stuck in that kind of habit, it gets harder to have the will to get scrappy for what you really want.

Where there’s a will there’s a way and everything is figureoutable are beliefs.  They are beliefs I have and hold and they help me with my perception when there are problems. Do I still feel frustrated and defeated sometimes?  Yes. But I always fall back on what I learned first.

Remind yourself of those two sayings and adopt them as your own mantras too. They will help and encourage you through challenging times and they will remind you to look at things from a different perspective. You might also have to set aside some stories and limiting beliefs that are holding you back.

You can figure anything out.  With enough will and desire, you’ll find the way.

Join the conversation in The Rider’s Mind Community on Facebook.  As a member of this community,  you’ll get tips and videos from me.  You can also share questions that you’d like answered on a future podcast.