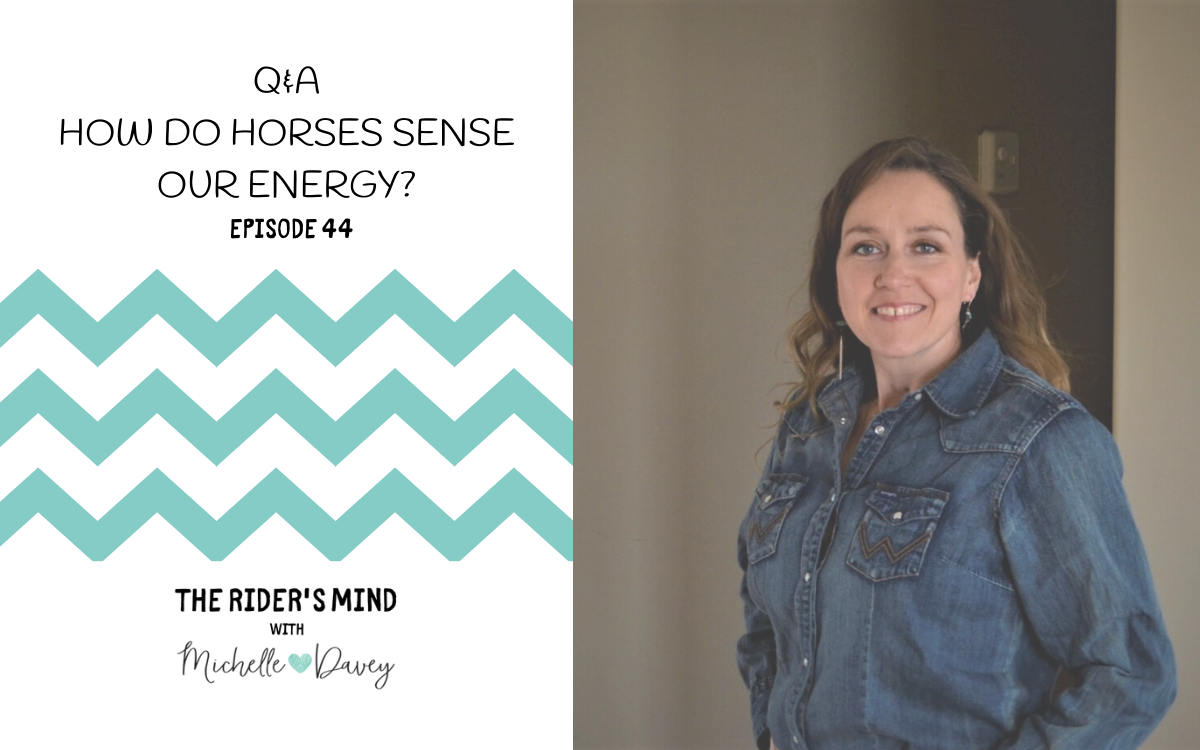 The Rider’s Mind Podcast Episode 44: Q&A – How do horses sense our energy?

This episode is in response to a question from The Rider’s Mind Community on Facebook.  A listener asked about how horses feel energy.

Question: How do horses feel your human energy?  How do they sense things like underground power lines?

This is an interesting question. I have a “knowing” of this energy through my own feelings and experiences, but I did have to do some research to find out more about this.

Some people are more energetically aware than others.  Think about the 5 senses: seeing, hearing, touching, tasting and smelling.  Some people naturally have stronger senses than others.  Some senses can be developed.  For example, people who are blind often develop their other senses.

Certain animals also have developed strong senses. For example, some dogs have a very strong sense of smell.  Some horses are more energetically aware than others.
.
There are also psychic senses.  People might be strong with visual (clairvoyant), auditory (clairaudient) or just “knowing” (claircognizant).  Some people strongly sense the emotions of others (clairempathy).

I did some research into the scientific side of sensing energy.

Each of us are surrounded by our own personal force field.  The insides of our bodies contain electrical generators, which are used to send signals through our body.

Your heart has its own neurotransmitter system. So does your gut and your brain. Virtually every single process which is keeping you alive can be traced back to an electric field that some component of your body is creating.

The  HeartMath Institute says that the magnetic field produced by the heart is more than 100 times greater in strength than the field generated by the brain.  This field can be detected up to 3 feet away from the body, in all directions.

Animals can detect energy and magnetic vibrations that we can’t.

They might detect sound, light, scents or vibrations that we don’t. Different animals have different strengths.  I didn’t find a lot of research on horses, but I found interesting information about other creatures.

For example, mosquitoes can detect exhaled carbon dioxide. Elephants produce a sound that can be heard up to 6 miles away that is below what humans can hear. Sharks detect the electric fields from the muscle contractions made by the bodies of their prey.  A number of animals, such as dolphins, use echolocation to communicate or hunt.

Fruit flies and frogs can sense magnetic frequencies.  Sea turtles return to the same beaches and homing pigeons can carry messages due to their sense of magnetoreception. They tune into the magnetic fields.

These are true wonders of the world.

Horses tune into various levels of our energy and what we’re putting out.   They notice body language and the energy behind a thought.  They sense smells and notice our tone of voice.

Some horses seem to be more sensitive to energy than others.  I met a horse who could sense oncoming epileptic seizures and would stop for its young rider.

Just like people, some horses seem to have stronger energetic senses than others.   Some of us have our sensory ability more developed than others.  I think horses are similar.

Science has been able to prove that there is an electric field around our physical bodies.  It can’t be seen by most eyes, but it can be seen with Kirlian photography. There are different levels to the etheric body.  This is also known as the aura. Some people are sensitive to others in their aura bubble, some not so much. It’s the same with horses.

Our energy body expands beyond what we can see.

This is also true for horses.  It’s been my experience that their ability to feel expands well beyond their body as well.

The HeartMath Institute has studies on the Biomagnetic Communication Between People and Animals.  They showed that when a boy and his dog greet each other in a room, their hearts go into a heart-rhythm synchronization. The same thing was done in a study with a lady and her horse.  Their heart rhythms synchronized.

Science seems to be catching up to the “knowing” that many of us have. Many of us know and feel energies that can’t yet be measured.

SQUID is an acronym for a device called Superconduction Quantum Interface Device. The research around this device started in the 80s. The energy coming from a healer's hands was measured and found to be at a frequency that was of benefit for “jump-starting” healing.   Now we can find devices that use energy to help with healing.

What I know for sure is that humans and horses are highly tuned energetic beings.

Horses are so tuned in to energy because they are living in the present moment. I feel we can learn a lot from them. By becoming more present, we would likely become more in tune with our own senses and abilities to feel energy.


If you’re looking to make changes to your mindset, be sure to sign up for my free Next-Level Mindset Mini Course.

I consulted the following sources in my research for this episode: