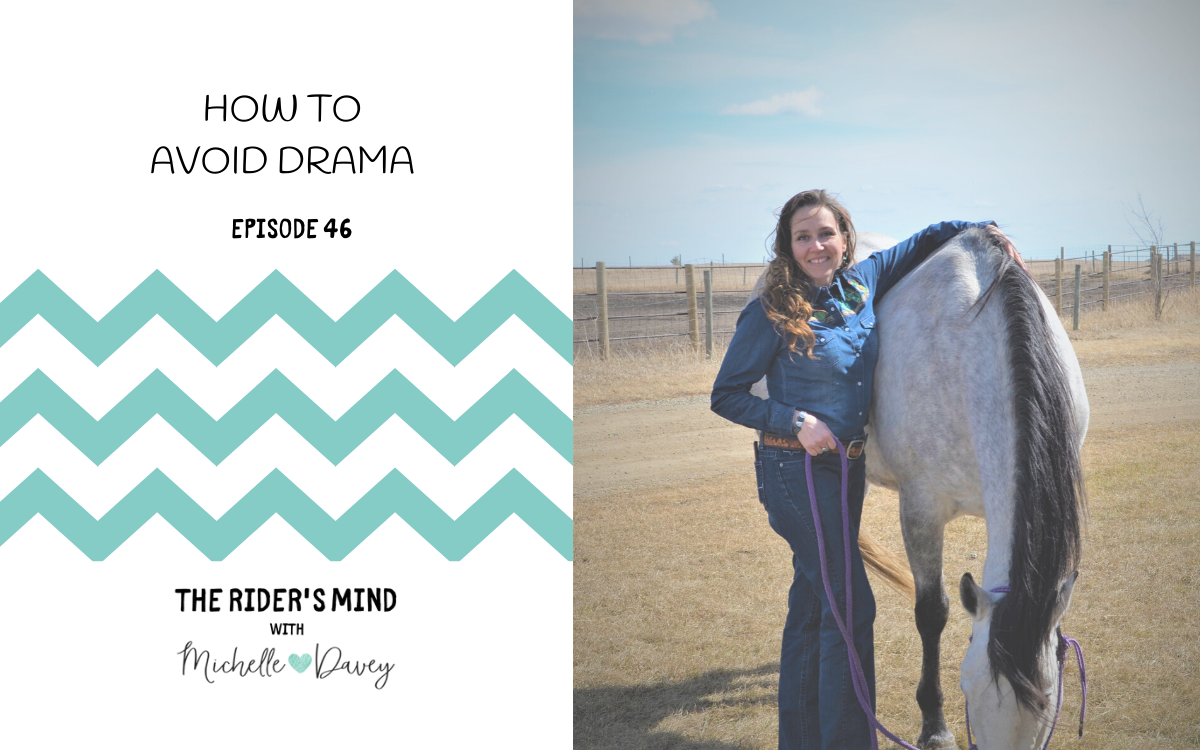 The Rider’s Mind Podcast Episode 46: How to Avoid Drama

I’ve had a few people ask questions about avoiding drama. In this episode, I’ll share my suggestions for recognizing the role you play in drama and how you can avoid it.

Drama is like a game or a play. Everyone has their part. If you are trying to avoid drama, you are involved in it.

You are playing a part in the drama triangle.

Stephen Karpman put forth the idea of the drama triangle. There are 3 players, even if there are only 2 people. This is an unconscious game. You accept an invitation to be part of the conversation. The person that doesn’t want the feeling they have passes it on to you and then they feel bad for passing it on and you also feel bad. It’s a lose-lose situation.

The drama game is played for some kind of benefit or recognition. There are 3 players: a victim, a rescuer and a persecutor.

The victim wonders why this is happening to them. They might complain. The victim is in a disempowered position. They are usually passive or passive-aggressive and sensitive.

The rescuer needs to save others. This is an empowered position. Saving others makes them feel worthy and needed. The rescuer can be passive, aggressive or passive-aggressive.

The persecutor claims “it’s all your fault”. They talk down to others and blame others. This is an empowered position. The persecutor can be aggressive or passive-aggressive.

Playing the game prevents us from dealing with the real problems.

Each corner of the triangle depicts a role that people play in the game of a dysfunctional relationship. One corner is the victim, one corner is the rescuer and one is the persecutor. People often switch roles, playing each part, all in one dramatic interaction.

How do you avoid the drama?

Avoid taking the bait. Don’t join the party. Diffuse somebody.

If someone is complaining, you can diffuse the situation rather than fueling the fire. Use a neutral voice. If you’re already in the drama triangle, you can recognize it and get out. Unsubscribe and shut down the conversation.

Instead of blaming others, try to remain neutral. Bring peace to the situation or walk away if you have to.

If you’re complaining about all the drama that’s going on, you’re now part of it.

You have the power to walk away. Unsubscribe. It’s an invitation you can decline.


If you’re looking to make changes to your mindset, be sure to sign up for my free Next-Level Mindset Mini Course.