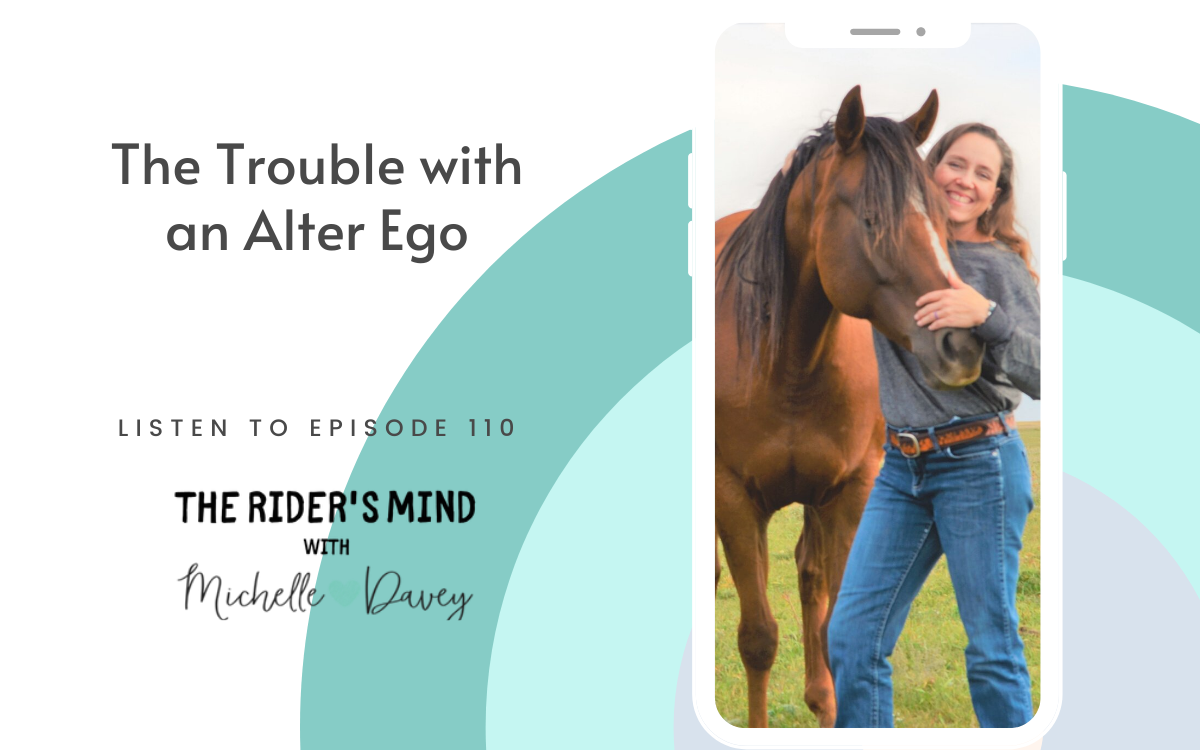 The Rider’s Mind Podcast Episode 110:The Trouble with an Alter Ego

I could call this episode “everything I wish I’d said in Episode 109” because it includes all the things that came to me on the topic of alter egos after recording the last episode. In this episode, I’ll share some of the problems with creating an alter ego and why you should aim to outgrow your alter ego.

In Episode 109, we talked about creating an alter ego as a tool to use for competition. It can be helpful to support you in stepping into the energy you need when competing.  Beyoncé created Sasha Fierce and Kobe Bryant used Black Mamba and the Mamba Mentality. This was done to separate their home life and their performance life.

Having an alter ego does create a separation within you.  You’re still the same person, but there are different aspects that live within you. You have a Sasha Fierce in you, she might just be buried real deep. It takes intention to get her out.

Thinking of that aspect of you as being separate from you isn’t the real truth. The energy you need is already part of you.

The examples I shared are performers. The difference with our performance is that we are playing with a horse. If your horse has never met Sasha or the Mamba Mentality alter ego, it could scare him/her. You don’t want your horse to be shocked when they see a new side of you.

You are not separate from your alter ego.  It’s been part of you all the time.

Consider bringing out a little bit of your alter-ego’s traits and practising with them.  Maybe you experiment with acting a bit more confident and try “bringing it”.

We do the inner work so that you don’t have to pretend to be a winner, you just step into the energy of a winner that’s within you.

This is part of the BE DO HAVE mentality we talk about in my Stride coaching group.

You want to be the person that does the things to have what you want rather than waiting to be that person after you have the things.

That winner is already an aspect of you. Be that now.

There is nothing wrong with using an alter ego.  It’s a powerful tool, but I want to draw attention to the fact that she’s you too.

Remember to take your horse’s well being into consideration too.  You don’t want to scare them with your alter-ego.They know the real you. Make sure they’re on board and confident enough that they can handle you when your energy is different than what they’re used to.

You can practice stepping into character at home and you also want to make sure you’re able to get out of character afterwards. Work on your energetic agility as you move in and out of “character”.

I feel like mindfulness is a big part of this.

We have to be aware of the energy we’re presenting in order to adjust it with intention.

In order to be aware, we must be present.

And in order to be present, we must feel safe and comfortable in the moment.

This is the kind of work we will talk about in my upcoming free training The Rise Of The Mindful Barrel Racer. Message me for the link to register or visit www.michelledavey.com.

Stride will soon be open for one last time until 2022.  Inside this group, we work on being present and becoming winners from the inside out.