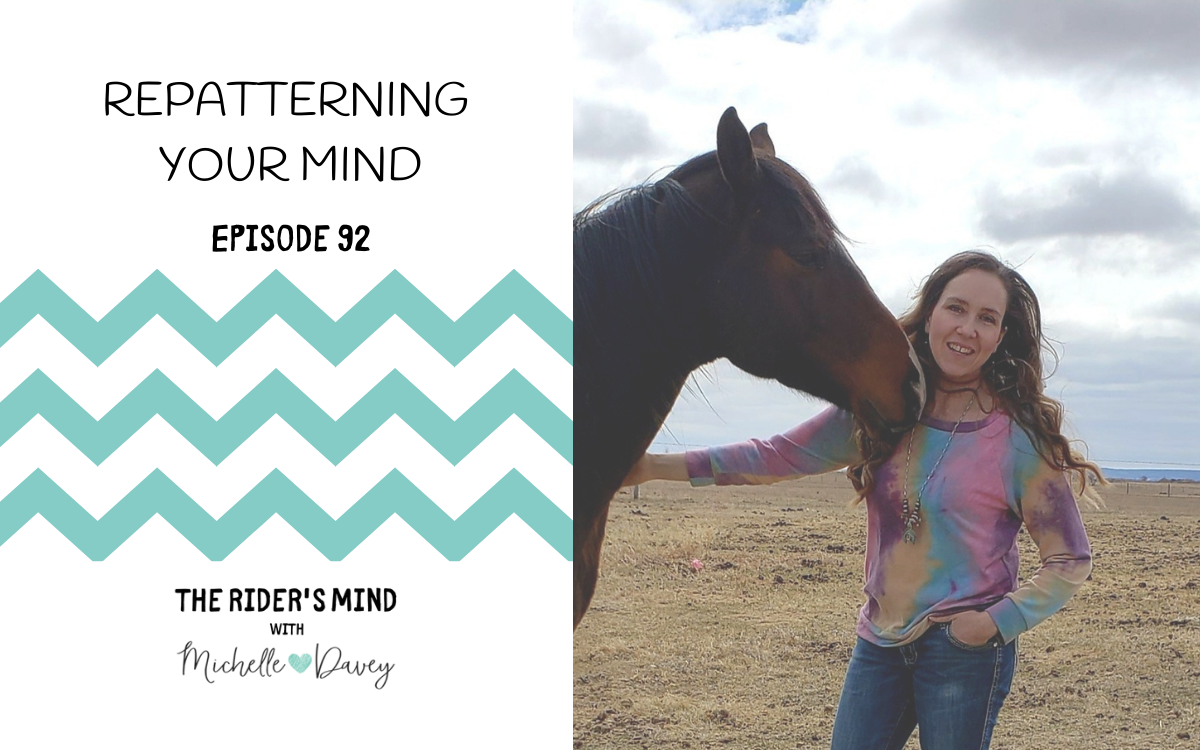 When I started learning about habits and repatterning, it really helped me empathize with horses and how it can sometimes be hard for them to create new habits. Knowing how habits are created through neural pathways has given me a lot of respect for horses and how fast they learn. In this episode, I talk about repatterning our thoughts and creating new neural pathways for better habits.

Recently, I’ve caught myself in a bad habit.

I need to be repatterned, just like I’d repattern my barrel horse if she’d gotten into a bad habit. We can get ourselves into a pattern of negative thoughts just like a horse can develop a pattern for the way they travel or the path they take. We need to give ourselves grace and give our horses the same grace. It can be more challenging than we realize to repattern ourselves and develop new habits.

Every day, I feed my goats off a round bale. I recognized that I had a habit of thinking negatively as I was feeding. It was the same repetitive thoughts every time I’d feed. I was angry about the work it took to feed off the round bale: I have to throw it over the fence, the wind would blow and get hay all over me. I was combining the daily habit of feeding with a daily habit of feeling angry and thinking negative thoughts.

This is similar to what happens with horses.

Every time we create a habit, there are neural pathways that connect. The habit becomes automatic through repetition, so we no longer have to think about it to do it. Both good habits and bad habits have neural pathways in our brain.

Some examples of automatic habits include:

When you have a bad habit, your body goes to the “well-worn” neural path automatically. When you’re trying to learn something new, it can be hard because you have to build new neural pathways.

Have some empathy when you ask your horse to change its habits.

If your horse is turning too soon, it’s probably done that at least a few times before (and you’ve allowed it). They aren’t thinking, they are just using the existing neural pathway. To form the new habit, first you need the awareness that you have a bad habit. Then you need to use the prefrontal cortex (thinking brain) to start doing the rewiring. It’s so important that our horses are in a thinking frame of mind when we’re trying to teach them new things (as opposed to forcing them).

If we want to create new patterns in ourselves or in our horses, there could be some roadblocks to creating new neural pathways.

What if every time we ask our horse to step up in a certain way, they feel pain? That’s a roadblock. Their body is saying “this feels unsafe”, so they won’t create a new neural pathway. The same goes for you. If you haven’t healed the reasons for the negative thought patterns, then your body will not feel safe thinking in a new way. Consider the roadblocks you may be up against when working on habits.

There are chemical reactions happening with your thoughts. Instead of getting my dopamine hit through negative thoughts, I’m increasing serotonin with my positive thoughts. Thinking positive thoughts is creating a new super highway of neural pathway that will elevate me and serve me well.

In order to change your habit, you need to be aware that you have a habit that is not serving you.

One of the best ways to get rid of the neural pathway you’re using is to stop using it. If you don’t use it, you’ll lose it. A strategy to get rid of a habit is to create a new one.

I’m now on Clubhouse too!  Find me @michelleadavey